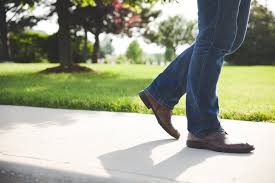 Fifty-nine years ago Donald Bean’s youngest son was born. Mr. Bean was 40 years old, living in Philadelphia with his wife and their two older boys, and he decided that he needed to take steps toward a long life. He wanted to improve his chances of a long, healthy life so he decided to go for a jog and now, with three sons and seven grandchildren, he has accomplished what he set out to do.

Thinking back on it now Mr. Bean says all of his children have integrated walking into their lives in some way. He feels that he and his wife set a strong example of that as they made walking an important part of their lives.

Fahnya, his wife of 70 years and dedicated mother to their children, passed away in 2013 at 94 years of age. Mr. Bean says he “was lucky to have found her.” As often as he jogged, she walked. They traveled the world on their four feet, traveling to many places including Europe, Asia, and East Africa, always choosing walking over a car. He says when you go to a place like Paris and you travel by car or limousine you don’t really see Paris in the same way as when you walk.

Almost 60 years after he went for that first jog, Donald Bean has not stopped moving and he doesn’t think that he would be this close to experiencing a century of life if it wasn’t for his continued active lifestyle. “I walk every day when the weather is decent for about 40 minutes.” he says; “I attribute my long life, at least in part, to that.”

Read more about Mr. Bean’s experiencing with walking and the lessons that can be learned for other walking advocates:

We are grateful to Donald Bean for his generous donation to America Walks in the name of his late wife, Fahnya. This donation will be used to create a comprehensive manual outlining the planning, implementation, and evaluation of the 2015 America Walks Waking College. This is a distance-learning education program designed to give local community advocates the training, skills, and confidence to become agents of change in their communities.