How Exercise May Protect Against Depression

Exercise may help to safeguard the mind against depression through previously unknown effects on working muscles, according to a new study involving mice. The findings may have broad implications for anyone whose stress levels threaten to become emotionally overwhelming.

Mental health experts have long been aware that even mild, repeated stress can contribute to the development of depression and other mood disorders in animals and people.

Scientists have also known that exercise seems to cushion against depression. Working out somehow makes people and animals emotionally resilient, studies have shown.

But precisely how exercise, a physical activity can lessen someone’s risk for depression, a mood state, has been mysterious.

A wealth of earlier research by these scientists and others had shown that aerobic exercise, in both mice and people, increases the production within muscles of an enzyme called PGC-1alpha. In particular, exercise raises levels of a specific subtype of the enzyme known unimaginatively as PGC-1alpha1. The Karolinska scientists suspected that this enzyme somehow creates conditions within the body that protect the brain against depression.

The upshot of these results, in the simplest terms, is that “you reduce the risk of getting depression when you exercise,” said Maria Lindskog, a researcher in the department of neuroscience at the Karolinska Institute and a study co-author.

Whether the same biochemical processes likewise combat depression that already exists is less certain, said Jorge Ruas, a principal investigator at the Karolinska Institute and the study’s senior author. But he is hopeful. “We think that this mechanism would be efficient if activated after depression has begun,” he said. He and his colleagues hoped to test that possibility in mice soon.

In the meantime, if work and other pressures mount, it may be a good idea to go for a jog. It may just keep your kynurenine in check. 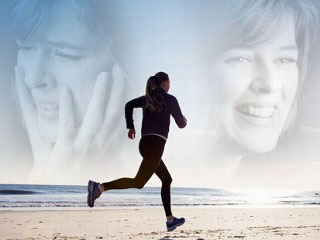