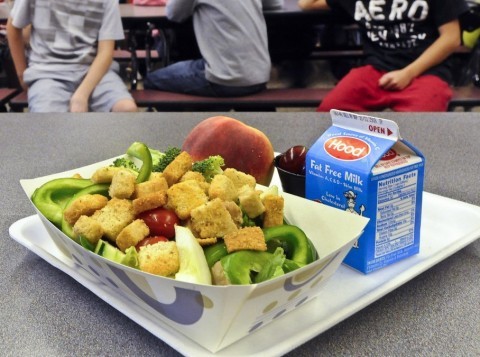 “Okay, everyone, let’s take a few mindful breaths, and think about our gratitude for Amy, who brought us apples for snack today,” says Mitchell-Giraudo. "As you take these breaths, try to tune into your body. What sensations do you notice?”

“I notice my stomach is already growling,” chuckles Ben.

“My mouth is watering,” exclaims David.

Another student follows David and then another until each child has had their turn. After each of her student’s observations, Mitchell-Giraudo rings her Tibetan meditation bell. Each time the children remain still, despite the loud chimes.

Next, she instructs her students to hold and examine the apples. First, they pick up the fruit and roll it between their fingertips. Then, on her suggestion, they bring the apples to their noses, using their sense of smell to savor the flowery scent of their snack before taking the first succulent bites.

"Excellent, class," says Mitchell-Giraudo. “Also, as a gentle reminder, before you eat the apple, ask yourself whether or not you're hungry."  The students nod in recognition. “Remember, you don't have to eat if your body isn't giving you a hunger signal," she says.

These students are learning a practice called "Mindful Eating," that focuses on cultivating "present moment awareness" during meal times. Mindful eating invites participants to "pay attention" to the food in front of them and engage their five senses (sight, smell, hearing taste, touch) before consuming a single morsel. This mindfulness practice builds the children's awareness of important physical cues like hunger and satiety.

While mindful eating is scientifically proven to help prevent overeating and obesity, a new psychological study suggests that it may also forestall eating disorders, such as anorexia and bulimia, which affect 30 million people each year and are the deadliest of psychiatric illnesses. Surprisingly, anorexia nervosa is deadlier than major depression, schizophrenia or bipolar disorder. In fact, individuals who suffer from this severe illness are at higher risk of suicide, as well as prone to major health complications, such as cardiac arrest.

The National Eating Disorders Association states: "For young women, 15-24 years-of-age, Anorexia is twelve times more fatal than all other causes of death among this age group. Only 1 in 10 eating disorders sufferers will receive treatment for that illness, which makes prevention programs even more valuable."

According to eating disorders researchers  Michael Levine and Linda Smolak at Kenyon College, “By having children and adolescents participate in prevention programs, such as mindful eating, it can protect them from anorexia, bulimia and binge eating disorder.”

The positive life-affirming feedback from the children who participate in the program is the biggest testament to just how much these newly learned life skills are helping them.

“Mindful eating helps me respect the food that goes into my body,” asserts Jamie, a middle-school student in Mitchell-Giraudo’s class. “I can make better food choices,” she says, “because when I slow down to eat, I can tell which food is filled with fake ingredients and which foods are organic.”

"Mindful eating teaches children how to connect with their body signals, and learn how to eat intuitively," says Kelsey Latimer, an eating disorders psychologist at the Center for Pediatric Eating Disorders and Children’s Health in Dallas. “This form of intuitive eating helps us distinguish between physical and emotional hunger and can help curtail overeating and binging.”

While Mindful Eating has been used in medical settings and eating disorder treatment centers, bringing the practice into the classroom as a preventative tool is a new concept.

“These programs buffer against eating disorder development,” suggests Latimer, “especially when administered during the late middle-school years. That’s a crucial period because it’s when students have been exposed to social the messages that “thin is in” but most have not yet manifested disordered eating habits to obtain a thinner physique.”

Mitchell-Giraudo, herself a graduate of the Mindful Schools program, echoes Latimer.

"It's wonderful to see my students engage in 45 minutes of eating mindfully, especially since they used to scarf down their food in less than 10 minutes," she says.

“By slowing down, my students have learned how to tell the difference between artificial and authentic flavors," says Mitchell-Giraudo, “and this knowledge helps them make healthier food choices.”

Penelope says she is grateful that she’s learned these life skills. “Mindful eating is a great way to eat because it helps you feel good about yourself,” she says. “It’s helped me think about what I put into my body, which helps me grow stronger and do better in sports, too.”

While middle school is the ideal time to introduce eating disorders prevention programs, high school students can benefit just as much from the practice as those who are younger.

Aggie Giglio, a nutritional counselor at Andover High School, a boarding school in New Hampshire, incorporates mindful eating with her students in the dining hall.

The self-serve cafeteria bustles with activity as the students collect their food, flatware and beverages. Once they sit down to eat, Giglio encourages them to unplug from other distractions, which means turning off their cellphones and powering down their computers. "Mealtimes are an opportunity to practice just eating,” she says.

Giglio suggests that they "eat without judgment," refrain from negative body talk and avoid measuring their self-esteem based on the foods they choose to eat. This is important since many of these teenagers struggle with the social and emotional changes of adolescence, including body image dissatisfaction.

For example, when Giglio hears students say, “I ate the cookies — I was so bad," a red-flag sign of negative body talk, she insists that they redefine the experience by using their senses to describe the flavors in the cookie. As an example, if a student feels guilty about eating oatmeal raisin cookies, Giglio will ask her to focus and describe the scent and taste of the cinnamon, oatmeal and raisins.

Unfortunately, these kinds of courses are in short supply because many educators and school administrators believe that social and emotional programs are too expensive or time-consuming to implement. At many schools, teachers and school staff are often overwhelmed, overworked and underpaid. To save costs and reduce staffing issues, the schools bring prevention programs and/or leadership training into the schools like the Body Positive, founded by Connie Sobczak and Elizabeth Scott. The program trains educators and school staff in the principles of mindful and intuitive eating and teaches a series of self-exploration exercises that help them examine their feelings and attitudes about food and weight so that they can relay these messages to their students, too.

Kathy Laughlin, director of counseling at San Domenico High School in San Anselmo, Calif., is a fan of the Body Positive training. “The risk factors for eating disorders at my school are very high,” he says. “Since we began to incorporate this program, I have not seen as many girls with issues related to body hatred.”As the evidence demonstrates, implementing a mindful eating practice is one of the best ways to help students develop a healthy mind and body connection — one which will bolster them for years to come.