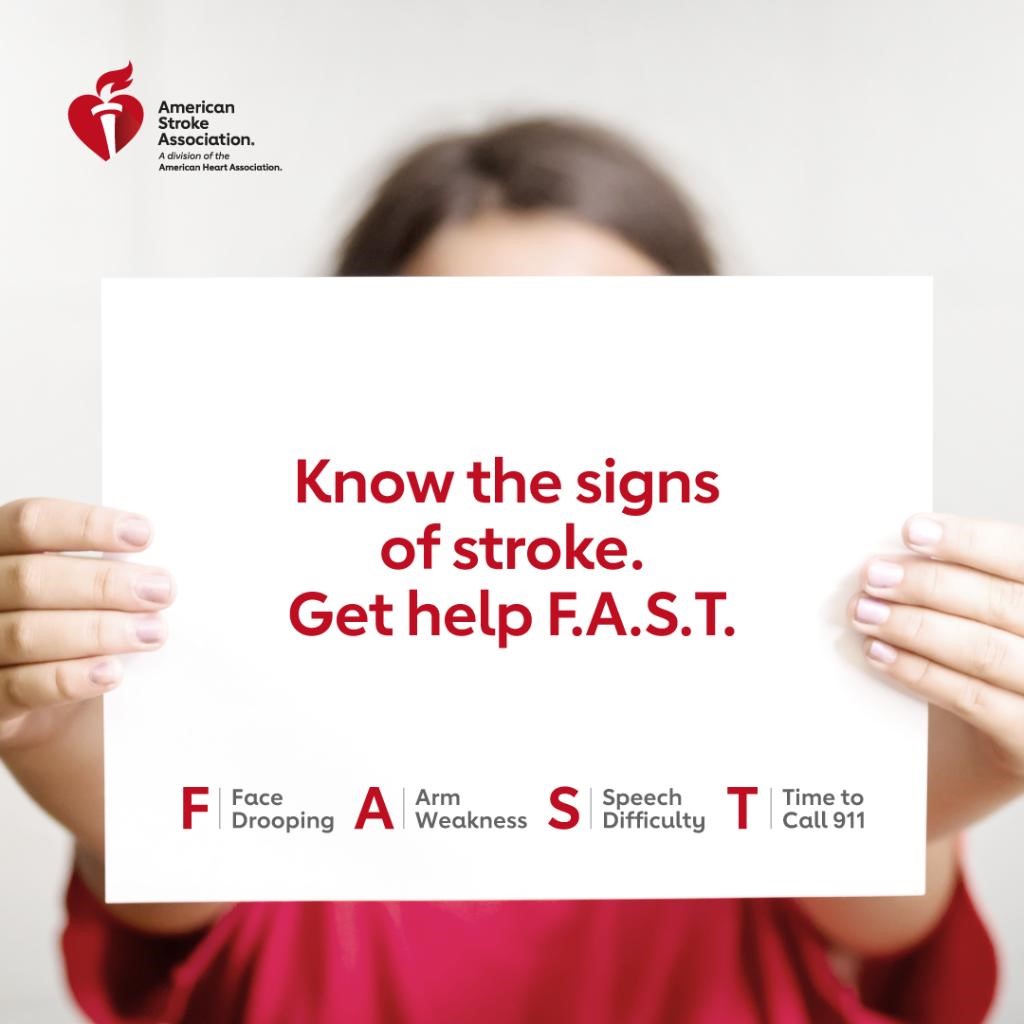 Do you believe that stroke only happens to the elderly? Don’t be fooled--stroke affects people of all ages, genders and races. About 800,000 (approximately 795,000) people in the United States have a stroke every year, with about 3 in 4 being first-time strokes. The American Stroke Association, a division of the American Heart Association, wants people to know their risk for stroke, prevention steps, and stroke symptoms.

Women have unique risk factors for stroke such as high blood pressure, migraine with aura, atrial fibrillation, diabetes, depression and emotional stress. Women who are already at risk of stroke should take extra precautions when using oral birth control pills. Get screened for high blood pressure before the pill is prescribed. Smoking while taking oral contraceptives increases heart attack and stroke risk.

Stroke is a rare but potentially devastating occurrence during pregnancy and the postpartum period. Stroke affects 34 pregnant women out of 100,000, compared to 21 women out of 100,000 who are not pregnant. About 6 percent to 10 percent of pregnant women develop preeclampsia, a dangerous spike in blood pressure that occurs late in pregnancy. Preeclampsia doubles the risk for stroke and quadruples the risk for high blood pressure later in life.

Women with a history of preeclampsia should be screened and treated for high blood pressure, obesity, smoking and high cholesterol to reduce their risk for stroke, according to the first-ever guidelines from the American Heart Association for preventing stroke in women released in May 2018.

Another study, presented in February at the American Stroke Association's International Stroke Conference, found that women who are pregnant or postpartum have three times the risk of intracerebral hemorrhage—bleeding in the brain--compared to when they are not pregnant or postpartum. Those who had a stroke were more likely to have a history of preeclampsia, diabetes and a coagulation disorder. Black and Asian women also had a higher risk compared to white women.

The overall rate of intracerebral hemorrhage during the pregnancy and postpartum period was 8.1 per 100,000 deliveries compared to just 2.5 per 100,000 patients during the control period. The risk of stroke was highest during the third trimester and the first 12 weeks after giving birth. More research is needed to study this issue and develop treatment plans.

Another study showed that stroke risk was five times more likely in women who have bladder infection, pneumonia or sepsis infections at the time of delivery. These women should be counseled about the signs and symptoms of stroke, such as severe headache, vision changes, speech difficulty or sudden weakness, and the need to seek immediate medical attention if they experience these symptoms, researchers said.

Stroke Among People of Color

Diabetes increases stroke risk at all ages. African-Americans, Hispanics/Latinos and other ethnic minorities bear a disproportionate burden of diabetes in the U.S.  Free diabetes resources are available at the new https://knowdiabetesbyheart.org website.

Sadly, children are not immune to stroke. Black children in the U.S. have more than 2 times the risk of stroke, compared to white children. Maternal health and pregnancies are normal in most perinatal stroke cases. Children with congenital heart disease have 19 times the risk of stroke. Abnormal heart valves, sickle cell disease or infections can cause pediatric stroke.

Up to 80 percent of strokes can be prevented by not smoking, making healthy food choices, getting enough physical activity (150 minutes weekly), maintaining a healthy weight, and treating conditions such as high blood sugar, high cholesterol and high blood pressure. What’s good for heart health is good for the brain health.

Know the Signs of a Stroke

Recognizing a stroke emergency is key to getting life-saving medical attention--every minute matters. For stroke, someone other than the patient makes the decision to seek treatment in 66 percent of the time. Knowing the acronym F.A.S.T. to remember the most common signs of stroke can help save a life or prevent long-term disability.

F - Face Drooping - Does one side of the face droop or is it numb? Ask the person to smile. Is the person's smile uneven?

A - Arm Weakness - Is one arm weak or numb? Ask the person to raise both arms. Does one arm drift downward?

S - Speech Difficulty - Is speech slurred? Is the person unable to speak or hard to understand? Ask the person to repeat a simple sentence, like "The sky is blue."

T - Time to Call 9-1-1 - If someone shows any of these symptoms, even if the symptoms go away, call 9-1-1 and get to a hospital immediately. (Tip: Check the time so you'll know when the first symptoms appeared.)

Through the American Stroke Association’s Together to End Stroke™ initiative, patients and caregivers can find information to prevent, treat and beat stroke. For more information, visit www.StrokeAssociation.org.

About the American Heart Association

The American Heart Association is devoted to saving people from heart disease and stroke – the two leading causes of death in the world. We team with millions of volunteers to fund innovative research, fight for stronger public health policies and provide lifesaving tools and information to prevent and treat these diseases. The Dallas-based association is the nation’s oldest and largest voluntary organization dedicated to fighting heart disease and stroke. To learn more or to get involved, call 1-800-AHA-USA1, visit heart.org or call any of our offices around the country. Follow us on Facebook and Twitter.

The American Heart Association/American Stroke Association receives funding mostly from individuals. Foundations and corporations donate as well, and fund specific programs and events. Strict policies are enforced to prevent these relationships from influencing the Association's science content. Financial information for the American Heart Association, including a list of contributions from pharmaceutical companies and device manufacturers, is available at http://www.heart.org/corporatefunding.